Two days after the last episode of the second season of Luis Miguel, her daughter, Michelle Salas, who has a leading role and a strong explicit sex image in the latest episode, posts an open letter expressing her pain, anger, her frustration.

“And suddenly I find myself needing to talk. Many know that I have not been a person who likes to dispel rumors. I have always stayed away from scandals and opinions even if they concern me because throughout my life I have learned that it is better for my mental health and to take care of those around me.», He begins by saying the open letter he published in the Instastory of his Instagram account and continues …

“Since I can remember my life has been on display in the public eye and I have lived surrounded by commentary, criticism, comparisons and inventions., to name just a few things. And yes, even though I’m used to it, I admit that it’s something that sometimes costs me work.

I am a public person, but above all I am a human being and a woman. A woman who many will think she had it all, but few know the truth. Maybe today is not the day to tell them, but I know that One day I will open a little more the doors of my life, of how I grew up and how much it cost me to be where I am today.

I am sure that on that day they will understand a lot and that a few will feel identified. In the end, we all share the same wishes, the same fears, the same doubts. We all fall and get up, we all have difficult times. But hey, that’s another story …

Today, sitting at the desk in my apartment with an open heart, I have a little trouble writing it down and expressing it correctly, because it is a sensitive subject for me. It is not a matter of work, but rather my personal life, my family, my childhood and my private life. Who was exposed and not in the best way.

First of all, it seems important to clarify that At no time have I authorized the use of my image, my name and my personal life. Just like they didn’t ask me if I was okay with my life becoming a TV series and one of the main characters in its fictional interpretation.

Yes, I had unforgettable moments with my father and I am happy that they can know a small part of the relationship that we had. But I must say that I find it really unnecessary, disrespectful and unfortunate the way the production decides to treat a woman, her daughter, to close this chapter of its story. Explicitly sexualizing her at 19 and violating her privacy.

I dare to express my feelings because I think I should, and not for myself alone. No one should ever feel like this and be treated that way. Much less without your consent. It’s not fair that they use my life and my story as if they have a right to it and that they also distort it as they see fit.

At the same time, I take this moment to warmly thank each of the messages and expressions of affection from the beautiful people who took care of me. Thank you very much for your unconditional support and for encouraging me to open up a little more than I think and feel with you.. I turn the page on this subject feeling a little better after talking about it. M ”, ends. 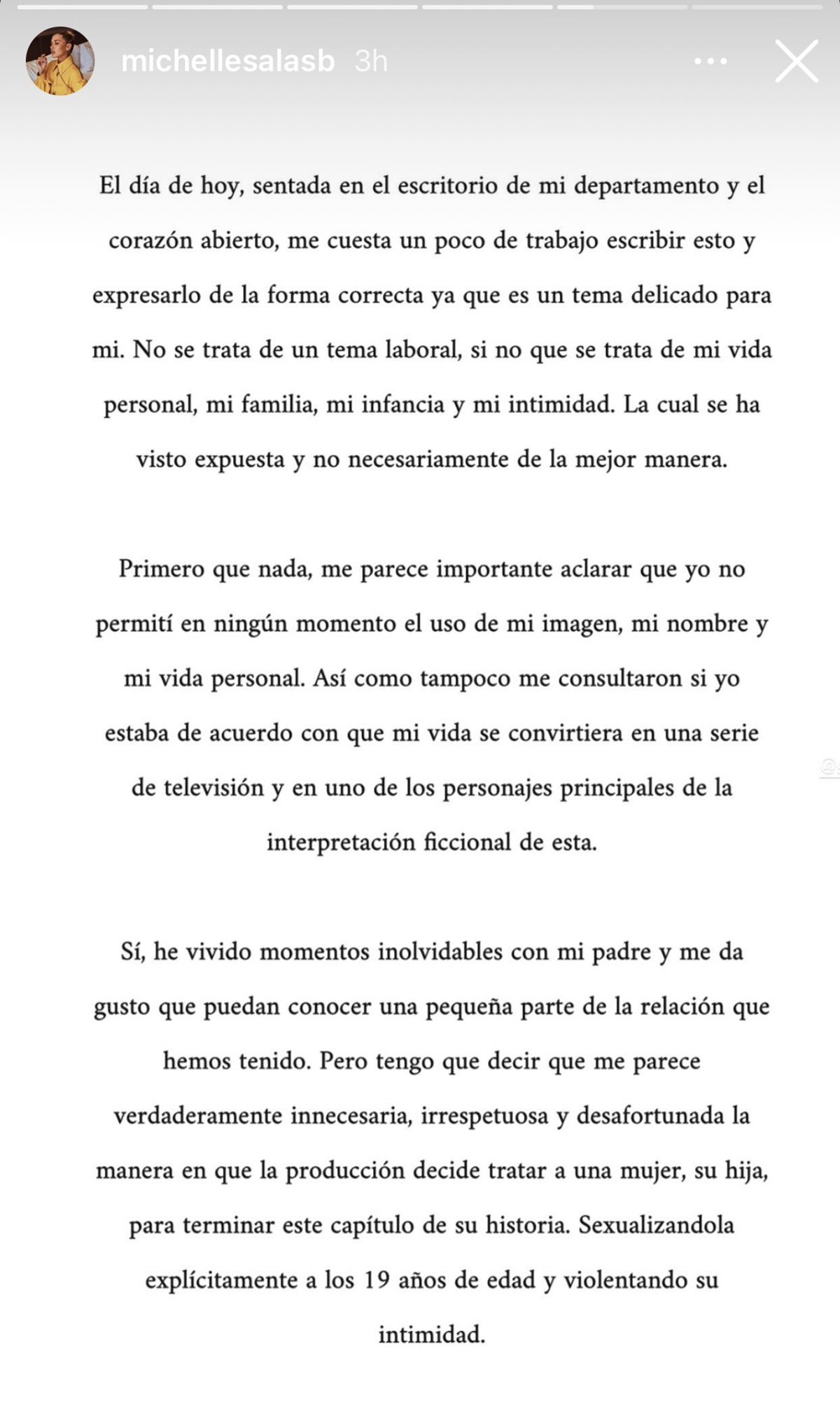 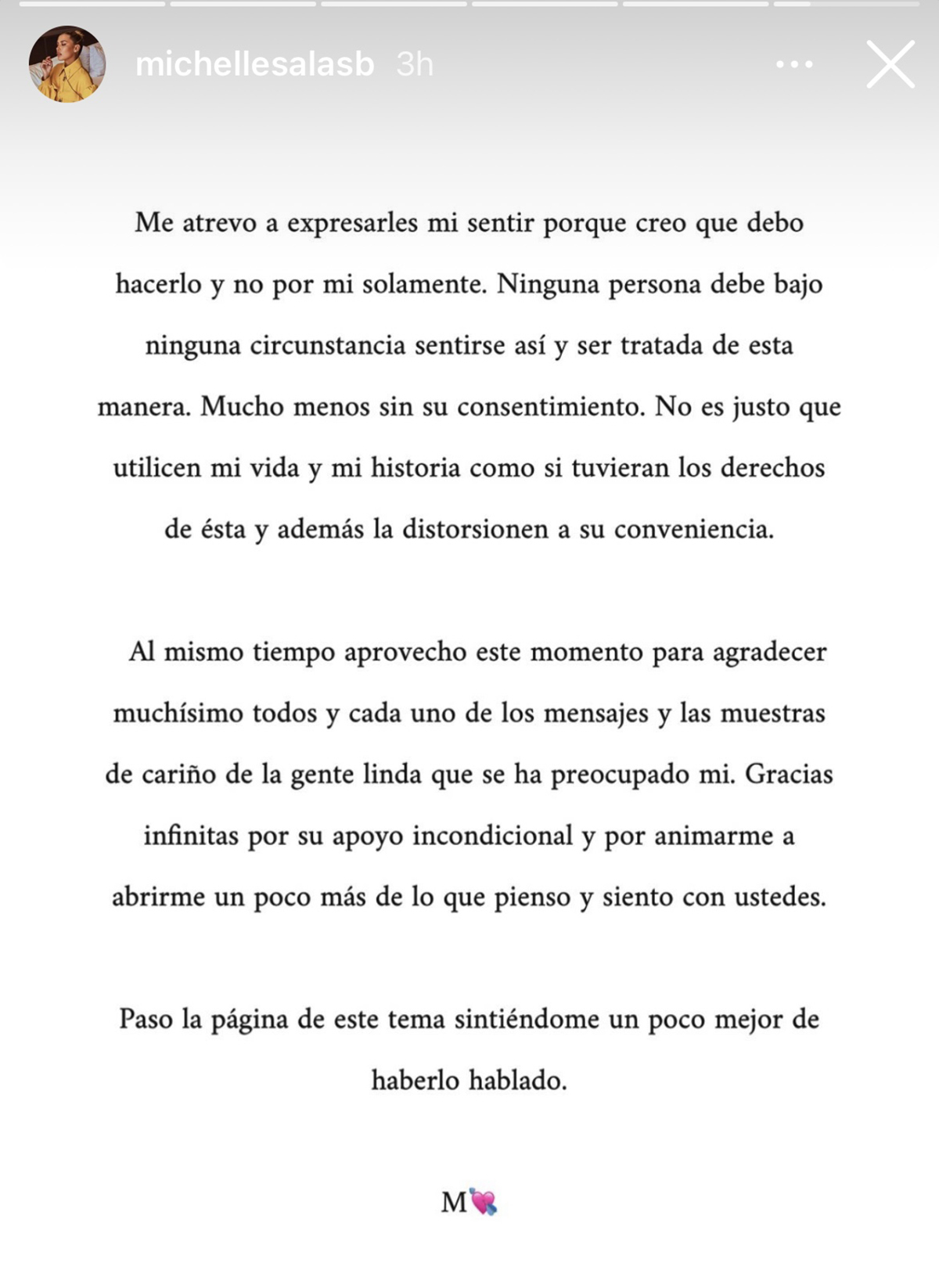 In the series, it is shown that although he has not seen her for 11 years, Luismi would have had contact with Michelle when she was little, and they had a very nice relationship.. Relationship which, according to the fiction, was picked up in Salas’ teenage years, when she sought him out and they even lived together.

In the series it is also shown that she fell in love with her father’s manager, who was 20 years her senior.. Who secretly escaped to Madrid, and ends the last chapter with a strong sex scene between the brand new lovers.

The other side of the story, which is not in the series, says Luis Miguel never wanted to recognize Michelle, the product of a very fleeting relationship with Stephanie Salas. What It was only as a teenager and thanks to Alejandro Basteri and Aracely Arámbula herself, that they began to have a closer relationship.They even did a DNA test.

About romance with the manager? Yes, it also tells the other side of the story, that Michelle fell in love with Alejandro Asensi, Luismi’s lifelong friend and who managed his career. When the singer found out that they would have had a strong fight that ended in a professional and personal separation.

The question now is: What will Luis Miguel say about all of this?… Certainly nothing, as always. Or maybe yes, but in the third part of Luis Miguel The Series.