Salsa Artist Ehshawnee to Perform in Utica: What to Know

Amal Fashanu drops sultry visuals for “Me & You” [Video]

Jennifer Pena, a native of Texas and singer, will participate in “Top Chef VIP”.

The Tejano and Latin pop singer is one of 16 candidates for “Top Chef VIP”, a cooking competition presented Tuesday on Telemundo. Aspiring celebrity chefs will cook meals for a trio of judges, with the winner taking home a cash prize of $100,000. The cast also includes singers Graciela Beltrán, Aida Cuevas and Luis Coronel and actors Marlene Favela, Lambda García and Gregorio Pernía.

Peña re-emerged last year as a celebrity contestant in the “Asi Se Baila” dance competition and is a household name to fans in Texas. She released a string of Tejano albums that made her a force in the genre. His biggest hits were dramatic ballads, including “El Dolor de Tu Presencia,” a song that spent two months at No. 1 on Billboard’s Hot Latin Songs chart. She recorded the 2002 World Cup anthem “Vamos al Mundial” and starred in the 2006 MTV movie “All You’ve Got” with Ciara and Adrienne Bailon. Peña performed at RodeoHouston in 2004 and released a live album of the concert.

The San Antonio native released her last album, “Dicen Que El Tiempo,” in 2007. She has since made sporadic public appearances, but appeared with husband Obie Bermudez on a remake of her 2021 single “Antes.” The couple competed on “Asi Se Baila” together.

Despite his absence, fans have kept Peña close to their hearts. She is a popular presence on TikTok and still racks up half a million monthly plays on Spotify.

She talked about putting her talents in the kitchen and the possibility of new music.

You’re back on reality TV. What made you decide to start over?

I cook every day. Like, a lot, all day. For a few months, it had become very difficult. At every meal, I dreaded it. I was going back and forth between the refrigerator and the pantry thinking, “What am I doing?” I thought it would be a good opportunity to broaden my cooking horizons, to learn the right technique.

What is your experience as a home chef so far?

I kind of threw myself into the world of cooking. When I started cooking, for two or three years, every day I made scrambled eggs. Friends came over and I made them scrambled eggs. But they still stuck to the pan. One of them asked me: “What do you use for a saucepan?” I was like, “Eggs. What do you mean?” He’s like, “Butter, oil?” Now, 14, 15 years later, I feel like I’m in the same place. Fly it every day.

Did anything surprise you in the competition?

I thought I was going to share my favorite flavors, the things I like to eat. At home, we basically follow a pescatarian diet. I haven’t cooked meat in 14, 15 years. I also try to avoid carbs, lots of fat. I always try to twist, to distort the recipes to make them healthier for me, for my children. I try to use meat substitutes. I don’t have that here. But I overcome my fears too. The first day I was cutting chicken like “Ugh”. But I did. And it came out fine. I had to taste it too. It was a major learning process, more for me than anyone else. There are people here who have a lot of cooking experience with things that I never even considered trying. Yesterday we learned how to make pasta from scratch. It was awesome. But I will never, ever. Never in my life will it take me five hours to cook seven servings of homemade pasta. Maybe one day, an intimate dinner for my husband. But I buy my tortillas. I buy my pasta. I also have a bit of a language barrier.

You are more comfortable in English. How did you get through?

The way I go through everything. I just do. What else can we do? I am also a visual learner. I used my iTranslate app a lot. I’m not going to lie. The measurements, man. The measurements are different. When they give us recipes that say 15mg, I’m like, “I just want cups and ounces, man.” I have my little notebook.

What is your signature dish in the kitchen?

Definitely my tortilla soup. But I’m afraid to do it here because there are certain spices I use. I don’t know if I will be able to create the exact same taste. Or even close, really. I’m not going to lie. In my tortilla soup I use canned beans, thank you very much. I don’t have enough time to make beans or tortillas from scratch.

I can see it now: Jennifer Peña’s tortilla soup in every grocery store.

I think it would be a success. Also, my veggie hot dogs. I can’t do them on the show. But I make them good. I promise. It’s my thing. Everyone I make them for says, “Man, that’s really good.”

Your husband was by your side on “Asi se Baila”. What does this experience look like for yourself?

I was definitely more nervous about it when I got here. I won’t understand anything and no one will be able to understand me because my accent is different. My Spanish is different, mainly tex-mex. I’m used to having him next to me, and he knows me so well that if I don’t know how to say something, he’ll replace me. This security was removed from day one. But like everything, I succeeded, and I really came to appreciate it. Even though Obie and I have become one in many ways, as artists we are still totally separate people. I am happy to be able to share again this side of me and this person, which people have not seen for a long time. Just Jennifer, all alone.

People still show you and your music so much love through social media. It must be great.

It’s really unbelievable. When I’m home with the kids, I don’t have much time for social media. But when I post, comments, love, it’s really amazing. I am surprised every time. It excites me. It makes me want to do more of what I feel I was truly born to do. I think it’s all inclusive. It’s singing, it’s dancing, it’s just being with people. I love sharing my crazy stories. And I love being in front of a camera.

Will we have new music soon?

I can’t wait, because I have so much inside. But the truth is, I haven’t been in a creative environment for very long. I don’t think he left me. I think it’s very present and there. I just need the chance to bring it out again. I know my next step in music is so important. It has to be on point. I’m not about to release anything mediocre or make a little club here just to be seen. If I’m going to do it, I’m going to do it big, and I’m going to do it well.

What advice would you give to this 12-year-old girl who became a star with the release of her album “Dulzura”?

I would say just more fun. Which means, assimilate everything. Really assimilate everything. I did so many things when I was a girl and started so early. It was just “Come on, come on, come on” for me, day after day. Photos and performances and recording. Now that I think about it as an adult, wow, the things I’ve been through and the things I’ve done, those are really special memories. There are so many that I have to dig it up. I really have to try to remember because I wasn’t there. I didn’t understand it. I’m doing my best to do it now. 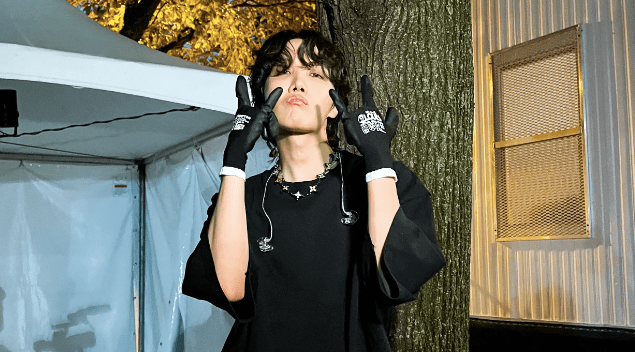 J-Hope is the first South Korean artist to headline a major US music festival MANILA, …